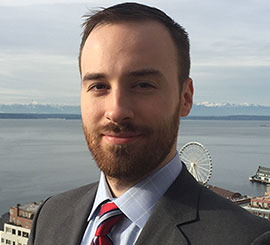 Originally from the East Coast, Jonathan moved to Seattle to pursue his passion for law. Jonathan started at Ressler & Tesh in 2012 as a legal intern while attending the University of Washington School of Law. During his time in law school Jonathan completed two externships for both the Honorable Andrea Darvas and Honorable Carol A. Schapira.

Upon joining Ressler & Tesh in 2014 as an attorney, Jonathan’s focus was motion practice and legal research. Now Jonathan’s focus also includes advocating and representing individuals that have suffered abuse due to the neglect of CPS/DCYF. Jonathan is proud to work at Ressler & Tesh making a difference for individuals who have been injured as a result of others’ negligence.

In his spare time, Jonathan enjoys exploring the Pacific Northwest and spending time with family and friends.